Welcome to Friday and the beginning of Manchester Pride's Big Weekend! I'm one of the photographers for the event and I'm very excited about it because I've only ever been to the parade bit before and now I'm going to all kinds of things! I feel very important with my pass on... 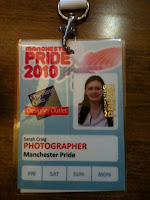 And Pride for me began on Monday with two fringe events that needed photographing.

At the LGF there was an event called The Secret Lives of Lesbians where they showed the BBC drama about Anne Lister who is regarded as the first modern lesbian and who wrote about her life in coded diaries. The diaries were decoded by Helena Whitbread who was at the event and took questions following the screening. The image above is the sort of thing I imagine Pride are looking for from my photos (I hope!). Following the Q&A session the LGF asked the attendees to share their secrets on postcards as part of book they are putting together. At the same time another event was going on at Taurus Bar called Inside Out Poetry arranged and hosted by the lovely Katy Stewart who is part of the Pride team. I was switching between the two events but here are my favourites. Then on Tuesday night I was really in my element because I was sent to the Frog and Bucket to capture an evening of Ribbons, Rallies and Rubbers (on stage photography? Yes please...)

The event was to raise money and awareness for the George House Trust who support people affected by HIV. That was comedian Jonathan Mayor and the next image shows the interview with the founding members of George House Trust. Next up Gerry Potter, who you'll recognise kindly performed as part of Monday's poetry night too. His performance poetry manages to be extremely entertaining and poignant. The next interview was will Paul Fairweather Harpurhey's Councillor who revealed he is HIV positive at last year's Pride vigil. The evening finished with the UK's no 1 drag king Valentino King. And one from outside before heading home... Watch this space for my Big Weekend pics and come say hi if you see me ;)
Posted by Sarah Craig at 12:19